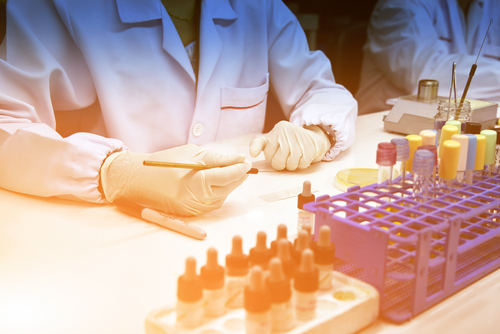 Analyzing the circulating levels of a specific RNA molecule, known as MEG3, may be used as a reliable and effective biomarker for the diagnosis and prognosis of ankylosing spondylitis patients, a study has found.

The study, “lncRNA MEG3 is downregulated in ankylosing spondylitis and associated with disease activity, hospitalization time and disease duration,” was published in the journal Experimental and Therapeutic Medicine.

Long non‑coding RNAs, or lncRNAs, are a group of molecules that do not encode a protein as RNA molecules do, but have the ability to regulate the levels of some genes. Given their regulatory role, lncRNAs are important players in human health and disease.

An lncRNA called the maternally expressed gene 3, or MEG3, has been identified as a tumor suppressor with an important regulatory role in different types of cancer.

A previous study revealed that MEG3 may also be involved in the development of osteoporosis — a disease characterized by bone fragility — which has molecular mechanisms similar to those of ankylosing spondylitis.

Based on this link, Chinese researchers in this study explored the potential impact of MEG3 in the development of ankylosing spondylitis.

The study enrolled 172 patients with ankylosing spondylitis, between the ages of 10 and 45 years, who were seen at a single medical center. Researchers also recruited 98 age- and sex-matched healthy volunteers to serve as a control group.

Analysis of blood and open sacroiliac joint (the joint between the sacrum and the ilium bones of the pelvis) tissue samples revealed that ankylosing spondylitis patients had significantly lower levels of MEG3 than their healthy counterparts.

Levels of lncRNA‑MEG3 in the blood could help diagnose approximately 75% of ankylosing spondylitis patients and tissue samples about 89% of patients.

Patients with lower levels of MEG3 in both blood and sacroiliac joint biopsies were found to have longer disease duration and more active disease.

“These results suggest that serum circulating MEG3 may serve as a reliable and effective diagnostic biomarker for ankylosing spondylitis,” the researchers wrote.

A lower expression level of MEG3 was associated with a longer hospitalization time and a higher rehospitalization rate within two years after discharge.

“These results suggest that serum circulating MEG3 may be used to guide the treatment and prognosis of ankylosing spondylitis,” the researchers said.

Additional studies are still necessary to explore how MEG3 may contribute to ankylosing spondylitis development and progression. Still, the researchers suggest that MEG3 may take part in the underlying mechanism of this disease by inducing inflammation and formation of new blood vessels.